This is a pair of large Corn King salt/pepper shakers. Buy these large Corn King salt/pepper shakers. Shawnee made these Corn King large shakers. These vintage Shawnee Corn King large salt and pepper shakers are #77. A beautiful Shawnee Pottery Corn King with Yellow Kernels and Green Shucks. This is a large oversized salt and pepper shaker set that measures 6 1/8″. The oversized Corn King Salt Shaker #77 has 5 holes and the Oversized Corn King Pepper Shaker #77 has 4 holes. Brighten up your table with this Shawnee Corn King Salt and Pepper shakers. Shawnee Corn King has turned 70, as the yellow kernels with green shucks began production in 1947. The salt and pepper shakers have their original corks. The cork on the salt shaker is loose. Shawnee Pottery made many designs of Vases, Planters, and other items, but the Corn King design was a very big seller and is desirable for collectors. Corn King by Shawnee began in 1946 with White Corn Kernels. These were made for Proctor and Gamble Company, which used them as a promotional giveaway in products made by Proctor and Gamble (Laundry Detergents ). In 1947 Shawnee changed the color of the kernels to yellow, with green shuck, to give a more realistic look to the Corn King line. Many items for kitchen and home use were made. The change made the Corn King line even more successful. Many Shawnee Pottery items are unmarked or were given a stick-on label that looked like a crown, Ovenproof Corn King, Shawnee. As the items were used, the label would come off or be taken off by the consumer before use. This pair has a partial label. Later on, Shawnee began an incised Shawnee U.S.A. with the item # on the bottom. Shawnee produced Corn King in the yellow with green shucks until 1953. In 1954 the corn kernels changed color again, to a very light pale yellow with Dark Green Shucks. This new line was named Corn Queen. Corn Queen was not as successful as the vibrant good enough to eat Corn King. Corn King is made in California, U.S.A.

Condition: In Excellent Condition. There are no chips, nicks, Cracks, or Repairs. Color is Vibrant. 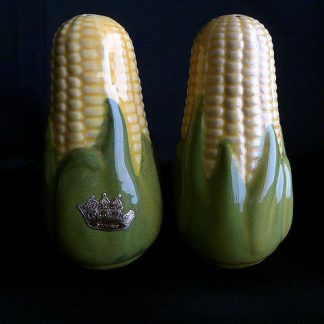