Please take a look at this wonderful vintage tool. This is a Parisian Hooked Rug Shuttle Needle Sears Roebuck. This Parisian Hooked Shuttle Needle is in its original box and has one needle that is in the package. This vintage Parisian Hooked Rug Shuttle Needle is from the 1930’s. The instructions are on the back of the original box and they are easy to read. This Sears Roebuck Parisian Hooked Shuttle Needle can be set up for either right or left hand. It is stated on the box that Patent Applied For Best Rug Needle Made. The box claims that if you are a fast worker, you can make a rug in a day. Sears began in 1886 when Richard Sears bought a shipment of gold watches from a Chicago Jewelry Store. His career as a salesperson took off and he hired Alvah C. Roebuck who was a watchmaker. They later named the company Sears Roebuck. Sears Roebuck saw the need for people in rural areas to buy all types of products. At that time Montgomery Ward had a very profitable Catalog Sales business. In 1895 the Sears Roebuck catalog came into being, offering a wide variety of items. They sold tools, clothes, Jewelry, and kits for people to build things on their own. They took over the lead in catalog sales from Montgomery Ward. In 1895 Julius Rosenwald bought a half interest in Sears Roebuck. He took over most of the management of the company. Rosenwald took over as President of Sears Roebuck in 190+G1438. Richard Sears left the company for health reasons. In 1924 Rosenwald became Chairman of the Board. He remained Chairman until his death in 1932. Rosenwald’s son, Lessing Rosenwald was named the new Chairman of the Board. The company is still in existence today and operates under the name Sears.

Condition: The Parisian Hooked Rug Shuttle Needle is in good vintage condition. There is a bit of rust to the shuttle needle which should clean up nicely. Needle is in excellent condition, with no rust. The box is in poor condition, side flaps are missing, although one of the side tabs are in the box.

Markings: Parisian Hooked Rug Shuttle Needle is marked on the side of the box. 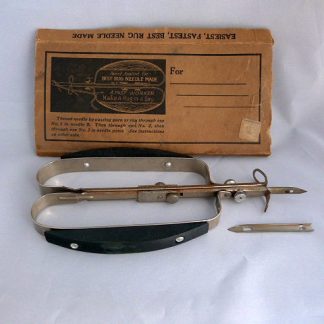