Vintage Schramberg Handpainted Serving Plate. The plate is adorned with beautiful handpainted flowers and has double open handles. The colors are vibrant and trimmed in brown. The serving plate is handpainted and Made in Germany. Schramberg serving plates, make a great addition to any table decoration. This plate measures 11″ and is marked with Schramberg Pottery SMF makers mark. I was not able to date this serving plate. Schramberg Pottery began in 1820, by Isidor Faist in Wurttemberg, Germany. By 1829 Faist built another factory, which was larger. Schramberg then began filling orders for Villeroy & Boch. Schramberg sold to their subsidiary Villeroy & Boch. Production continued until 1912, when Moritz and Leopold Meyer, purchased the factory. It was in 1912 that the “SMF” was added to the Makers Mark. The brothers began to enlist famous artists to create shapes and designs. Most famous was Eva Zeisel. Zeisel began designing for the Meyer brothers in 1928 – 1930. Her creations were used, even after she left. As the Meyer brothers were Jewish, they were forced to sell the factory and flee from Germany 1n 1938. The Meyer family went to England. After WWII, Peter Meyer, Moritz Meyer’s son returned to Germany in 1949. He was encouraged to rebuild the factory, and once again produce Schramberg Pottery. The factory continued production from 1949 – 1989.

Condition: In Good Vintage condition. No Cracks, chips or repairs. A few flea bite nicks on the rim of the serving plate. Some scratches from use.

Markings: Handpainted above shield. SMF inside Shield. Below Shield Schramberg Germany. Numbers are marked and some incised on the back of the plate. They are 67, 46, 2 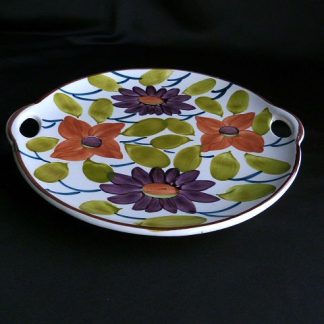